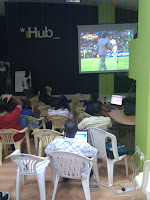 Over the weekend, I attended BarCamp Nairobi, which was combined with WhereCampAfrica. It was a great event, which filled both the iHub and Nailab spaces. Despite a fist fight that developed between myself, Stefan Magdalinski, and Mikel Marron, the event was otherwise very friendly and cooperative.
I went to great talks on:
And too much more to post on. But like all Barcamps, the most interesting stuff is in the halls. I learned a lot about the emerging tech community here, and the difficulties of getting work in the face of a small percentage of the population being online. Like most of the developing world, they are jumping straight to mobile, largely skipping a large scale computer market. And mobile devices are where most people get their net access.
Of course, the event had to break each day for World Cup games, which were put up on the projection screen at the iHub.
It looks like the iHub is the place to be. My only regret on this trip is that I won't be here on the 26th, when the iHub hosts a big LAN party for gamers.
For those of you in Nairobi, I'll be presenting tonight at the iHub for Mobile Monday, about 20 minutes on using Google Mapping technologies on mobile devices.
Posted by Unknown at 12:05 AM