When you go to Prague, people ask you a lot "Is this your first time in Prague?"

In fact, my trip for Google Developer Day in Prague on Tuesday was my fourth, and my third in the last year. My first though was in 1990.

My first visit was in 1990. I was in the midst of my junior year abroad, living in Budapest. I didn't have much money, so I took the train up to Prague, a 9 hour trip if I remember correctly, stayed 16 hours in Prague, and went back that evening. It was a magical place back then, just emerging from the fog of communism. Spared destruction during the Second World War, Prague retains a medieval core, one of the most beautiful and unblemished in Europe, in my opinion. It became the cool center for expats in the early 90s, when English speaking 20-somethings would go to Prague to teach English and drink inexpensive but delicious beer. So many went there, in fact, that a 2002 novel about expats in Budapest in 1990-91 was entitled Prague, as in they missed the boat and went to the wrong Eastern European capital. (I don't regret Budapest, BTW, but Prague did have the cachet back then).

I left my nice camera at home, so took pictures with my Nexus S. I'm particularly happy with this one: 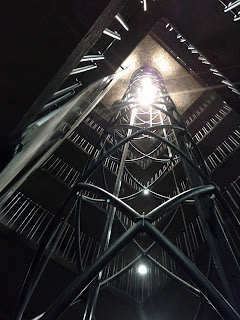 There are plenty more pictures of Prague from last year at GDD in my Picasa albums. Some day I'll scan in all the photos from 1989 and 1990 and post those.
Posted by Unknown at 9:00 AM

Email ThisBlogThis!Share to TwitterShare to FacebookShare to Pinterest
Labels: memories